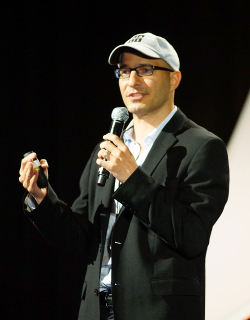 Why did you start Code.org?

Hadi Partovi: I began Code.org as a hobby, to create a video to show people the importance of learning computer science. That video went viral and had 10 million views in a week. More importantly, 15.000 schools and educators reached out after the video asking for help in adding coding to their curriculum. That's when I decided to build an entire organization dedicated to the vision of teaching computer science in every school.

Is learning to code really important for everybody? Many people just use IT devices and will never work in the IT sector.

HP: This isn't just about learning the syntax of coding, it's about computer science and computational thinking. Just like when you don't just study grammar, you learn Italian which is also about literature. Computer science is foundational for EVERY 21st century citizen – just like school teaches us that water is H2O, or that plants do photosynthesis, it's important to learn what an algorithm is, or how the Internet works. In the 21st century, computer science is a liberal art.

Why a non technological company should support this goal?

HP: Any company that cares about education and children should be interested in helping the workforce of the future. Technology impacts all of us. Just imagine the impact of cybersecurity, big-data, or robotics in the next 10 years, and then imagine the difference between a population that is or isn't prepared to handle these things.

Which is the current situation in the U.S., what have you obtained and what are the next steps?

HP: The U.S. is a complicated system, so there's no easy answer. In the U.S. we've trained 15.000 teachers to bring computer science in schools. And we've achieved commitments from the largest cities (like New York City, Chicago, Los Angeles), and many states (like Arkansas, and Washington) to expand computer science to every school, or at least to fund the addition of computer science to the curriculum. We need to continue this work until we reach every city, every state, and train roughly 300.000 teachers.

Code.org is getting more and more followers in Europe. How do you explain this success?

HP: This is a movement that has no enemies, no losers. When asked, 90% of parents believe that school should teach their children computer science. We ALL see technology moving faster than any of us can keep up, and the idea that our children are going to go to school for 12 years and NOT learn about any of it – that is a problem that everybody understands and wants to help solve. This is a message that resonates worldwide, in the U.S., in Europe, in Latin America, in China, even in Africa.

Do you think the challenges to bring learning to code in the public education system are the same all over the world?

HP: In every modern school system, the challenges are the same two things: (1) bureaucratic administrations are slow to move, and slow to even recognize the need and the demand, (2) there are not enough teachers trained to teach this course. We don't need software engineers to teach computer science – just like we don't need surgeons to teach our students biology. But the teachers still requires some preparation and training, and that costs time and money. In other places, there is a third problem – the schools don't even have the computers or internet access, or in some cases even the electricity. This last part is not our problem to solve – most governments are already quite adequately focused on bringing computers and internet access to more schools.

You are tackling a global educational challenge. How much time you think it will be needed to succeed?

HP: In the U.S. I think we can be optimistic that this problem can be solved in 10 years. In the rest of the world, I think it's situation by situation. My personal time (and Code.org's current mission) is focused on the U.S., and we look to partners like Programma il Futuro to help in the rest of the world. With the support of the Italian government, I think this problem can be addressed in Italy's schools in only 5 years.